It is typically twice a year I take the time – or I find the time – to give my desk and office a thorough cleaning. For some reason, I feel guilty organizing my space – much more so than any guilt I might feel in letting it pile up.

The first bi-annual cleaning pass comes around the Christmas or Holiday break. Most offices seem to be on a mental hiatus anyway, with staffers partaking in holiday cookie exchanges and ugly sweater contests, or even recuperating from the Holiday Happy Hour the night before. Often associates are out of the office diligently using their remaining time off before the end of the calendar year resets the clock. It is then I can find an afternoon to dig in, unearth and organize.

The second time of year my office receives its due attention is usually sometime during the summer. There tends to be at least one or two days where, in the good way of a perfect storm, projects are done, phones and emails are quiet, and my clients or associates are on vacation. This means regularly scheduled meetings are cancelled. How joyous those one or two free hours seem.

At one company I worked, the department head implemented one component of Six Sigma. She thought we marketers were a messy bunch (in full disclosure Dawn did once receive the Golden Shovel award from another department). For one week we underwent training to organize and rearrange, learning everything should have its place and could be found. To ensure nothing went lost or missing, we put a label under every item on the shelf or desktop. Stapler. Monitor. Photo Frame. 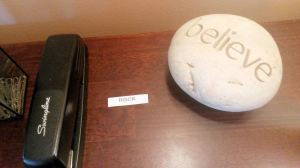 Yes, even the rock received a label. I have an inspirational paperweight given to me by a co-worker years ago, and even that, when you lifted it from its spot on my desk, had a label to ensure I would notice if it was gone. It usually got a good laugh when people picked up the rock to look at it and found the label identifying its location.

I’m confident I’ll never label everything like that ever again, but for two weeks each year I feel proud of myself (nice little pat-on-the-back moments) and admire my clean and organized office. I appreciate there is actually a desktop surface underneath the file folders and documents on my desk. And maybe even a label.

If I have to be on Facebook to be invited to an event, then I wouldn’t want to go anyway.

A volunteer made this statement when she learned — after the fact — of an organization’s important event. The only method of communication the group’s director was using was posts on the organization’s Facebook page. While the volunteer was upset because she didn’t receive an invite to the event, her desire to stay off social media sites was greater. If they want to reach me, they can call, email or send a letter.

It got me thinking: since social media is important to so many organizations, how can you be sure you’re reaching audiences adequately or effectively? Some think, “Because we have a Facebook page, everyone can find everything out about us so we’re only going to post information there.” Unfortunately, if someone doesn’t have a Facebook account, then access is prohibited. In that particular case, the organization – like the one mentioned above – would have been better off posting information to its Web site (which it did not) or emailing info to its volunteers (again it did not).

Without experienced, strategic and tactical guidance, companies and organizations often find themselves travelling down a path of uncertainty and into a sea of shortfalls concerning customers, volunteers, employees, etc. Is social media enough, or should you still employ “older” tactics such as email or direct postal mail?

Maneuvering an organization through the social media universe toward a strategic plan can be overwhelming and exasperating. Often companies will internally hire an industry expert or externally hire an experienced agency or consultant to manage those avenues of communication and keep messages integral to the overall marketing plan. When Facebook was just taking off, the company where I worked had a severely understaffed marketing communications department. However, someone at the C-level was made aware of a competitor’s Facebook page and immediately the directive was sent: “We don’t want Company B looking better than we do, so get a Facebook page up pronto!”

It was a shoot-from-the-hip and a “me, too” scenario all rolled into one – most marketers’ nightmare. The company certainly needed to amplify social media efforts because the majority of customers spent a considerable amount of time surfing the web and sharing information, however, the major roadblock to implementing a smart and strategic social media program was the basic fact that the department was understaffed and under budgeted. Without dedicated personnel (internal or external) to manage what would not only be the Facebook site, but also the YouTube page, the Twitter feed and the management of Wikipedia pages (just to scratch the surface), the company was destined to fail in its efforts.

Ultimately, there was no alternative and no additional budget was available, so the team dug in and did what they could to maintain and refresh information on the social media sites. They squeezed these tasks into their already full schedules. As predicted, the social media activities and results were lackluster, infrequent and certainly not industry leading. They were there and created, but nothing of which to boast or brag.

Managing social media sites can be a daunting task for companies who may have personnel or a budget assigned, but when working with volunteer organizations, it can be more difficult because resources are often in shorter supply. One organization I work with is still in its fledging stage of developing its social media programs, but does have a Facebook page and a web page. Overall, the organization’s success doesn’t revolve around social media, but considering most people are computer-savvy and have some level of access, it makes sense to stay connected. The challenge for this group comes as the committee is celebrating a 50th anniversary celebration. There are many activities and events scheduled, so during the planning process someone asked about social media:  what was the organization going to do? How could this group best advertise the show and communicate information to its intended audiences?

The volunteers are thinking about what to do. That’s the first step of climbing the social media mountain. Where it will go, who will manage it and what the messaging will contain has yet to be determined. It may surely be a blend of electronic communications and some of the “traditional” efforts. If so, there’s at least one volunteer who will be happy she won’t miss any events. In the meantime, she’ll have to just ask around and see if ‘word of mouth’ is as effective as a Tweet.

Dr. Stephen Covey has passed away. I have dutifully noted it in my planner.

Fourteen years ago, a company for which I worked sent me to a seminar on the Dr. Stephen Covey process via the FranklinCovey organizer system. At first I was reluctant and hesitant, thinking it all a scam and an attempt to extort money out of me for a spruced up calendar. I was wrong.

Up until that point, my life was a jumble of little calendar books, notes, papers and a general lack of focus. I planned my time as if I were still in school – September through June. I never really paid much attention to July or August.

I remember my first planner – a beautiful forest green leather-bound daily organizer. It became my constant companion, never leaving home without it. After that seminar I became an organized machine, which was extremely useful as I rarely had a free moment in my life between work, relationships, dancing, pageants, volunteering at non-profits, teaching, volleyball and socializing. Suddenly everything I did was located in one place. Even though the days and to-do lists were packed, it was sublime to see everything neatly and orderly laid out for me to follow and check off. When going through my daily tasks, each time I crossed off all my “A”s and moved on the “Bs” and even the “C”s, I got tingley from the excitement of accomplishment. And if I didn’t check them all off, it was okay because tomorrow was another opportunity to succeed!

I have gone through a few binders since then, but still use my trusty (even if it is considered outdated by not being electronic) planner to this day. There is something so soothing about looking at the month and knowing exactly where and when I need to be without worry. Then turning the page and finding a whole new month of opportunities.

Dr. Covey – thank you for helping me to organize me.