Zumba instructors are like a gang. Not like the Bloods and the Crips, but more like the Olivia Newton-John “Let’s Get Physical” kind of exercise divas. This group of (mostly) women isn’t scary in the least. I have yet to see one pull a knife or take down a cop. They’re most intimidating when they group together in their bright garb: lots of neon; slashed pieces; wonky knee-high socks; half-shirts; backless hoodies; hair curly and styled; bandanas on legs, arms or heads; and non-stop smiles.

I have to give it to this group, though. They really know how to support their brand. Nearly every piece of clothing the instructors wear has “ZUMBA” proudly emblazoned somewhere on it. The tops, the pants, the tank tops, the bras, the socks, and the shoes. Even most of their songs shout out ZUMBA at some point. It’s all consuming.

I’m certain most of the instructors are having too good a time to care about branding, but to me they are a marketer’s dream come true. Without even saying a word, they announce to everyone that they are part of Zumba and it’s done with enthusiasm. I applaud the marketers at Zumba. They defined their objectives and got their brand ambassadors to live and breathe the brand.

Conversely, I attended a company meeting recently where a new logo was introduced. It was met with a lukewarm reception, which was disappointing because to me this is big news. HUGE. It means the institution has a new brand and vision it wants to communicate to its audiences. It was the right place for the introduction, too, as communication should really start with the employees who are the number one brand ambassadors. Unfortunately, after the logo was unveiled, the presenter evenly said to the assembly, “Be sure to pick up a packet from a marketing rep on your way out.” That was it. There was no T-shirt launchers shooting shirts into the crowd, no padfolios or coffee mugs handed out, and no confetti raining down to signal the big event. Nothing. The news just fell flat. And by the time I excited the auditorium, there were no marketers in sight and I never received a packet.

I’ve been through many rebranding and/or relaunching of company identities and I’ve seen it all from great execution that pumped up the masses to events that missed the mark. Unfortunately, in this recent unveiling, even though the organization introduced the concept internally, they didn’t seem to get their employees to embrace or believe in it. If a company fails to get the employees to celebrate it at the start, it’s a lost opportunity.

Employees can be the greatest brand ambassadors. They are the ones on the front lines, talking up the products, the mission and the environment and selling the idea to the customer. If they don’t believe in and support the new branding, that’s probably a good indicator it’s going to be a hard sell out into the universe. Imagine if a company like Google didn’t have its employees believing in the brand. Rather unthinkable, isn’t it?

Turning employees in brand ambassadors is a cultural shift that takes time, but is possible. I know of a company where the employees looked forward to the annual trade show season because they were guaranteed at least three show shirts. That meant they had multiple branded shirts to wear during the year, and they were excited about it. It may sound insignificant, but when more than 100 internal staff and 300 dealer support staff work an event, it’s a considerable presence. Then imagine all those people wearing the branded clothing back at the facility yearlong. Employee pride is the intangible side of marketing that drives CFOs crazy. It won’t appear on a spreadsheet somewhere, but it can be the most effective tool.

Empowering employee brand ambassadors may be just as effective as the Zumba instructors who live and breathe their brand daily. When there is internal belief in a brand, it radiates out like spokes and reaches into far corners. Thankfully, we don’t all have to wear neon green bandanas to show our pride. 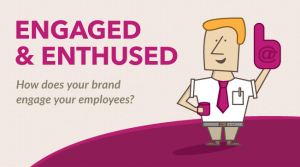