The surface is placid. 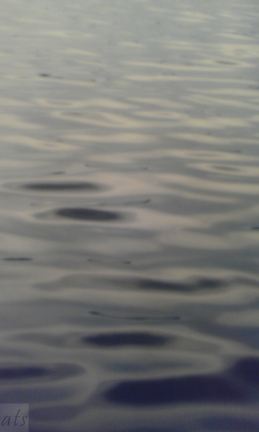 Drop in one tiny pebble
And it begins.
Ripples, moving outward,
Energy building, cresting, swirling
While the pebble sinks deep.
Slowly
The surface is calm again.
Subtle reverberations
Echoing in the distance.
A weight on the bottom.
Presume the energy fades away,
It resounds for miles.

At quarter of eight, Mary Lou pushed open the door to Lorenzo’s bakery and overhead the small bell happily jingled, signaling her arrival. A few minutes later, she emerged with a bag of assorted donuts and the luscious smell of sugar and butter swirling in her hair. Noting the bright sun of the early morning, she firmly placed her sunglasses on her face as she walked along the cobblestone sidewalks flanked by wrought iron lampposts. Holding the bag carefully in the crook of her left arm, her purse was slung over her right shoulder and held tightly to her body, melting into the voluptuous curves of her waist.

It was a lovely morning, Mary Lou thought to herself, remembering how the evening before had been so dreary and damp. The sun was rising quickly and the morning already promised a day of warmth. On the transit bus bench in front of Handel’s Hardware, she saw Pete, a local electrician, reading a book. She wanted to wave, but he didn’t look up and she continued along, the crepe soles of her shoes silent on the stone walk. 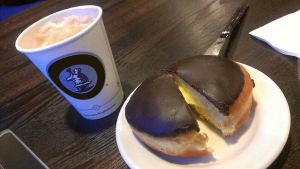 The farmer’s market was opening in a few minutes and the town was coming to life. Crowds were already patronizing shops and sharing coffees at the little tables in front of the small cafe on Main Street. Mary Lou entered the Coffee Bean, waited in a short line and then ordered her usual large coffee with soymilk and a shot of raspberry. In a few minutes, she was back outside taking small sips of the hot liquid. The coffee was bittersweet to taste, just the way she liked it. She paused on the sidewalk as a group of five young ladies bustled out of a waiting car and passed in front of her. Unaware of her presence, they were apparently eager for an appointment at the beauty salon. As the door shut behind their energetic chattering and she was able to continue on her way, she assumed the occasion was most likely a wedding. She sighed happily. That might mean another new baby soon.

Using her hip to guide the door open, she entered the corner building on Main and Fourth, walking to the right and into a room that welcomed her with the mixed scent of coffee and perfume. It was the Covington Senior Center, and for the past three years on the first Saturday of each month, Mary Lou led the crochet group. She quickly slipped out of her light spring jacket as her group of ladies, which had grown from the original small gathering of four to a bursting assembly of 12, warmly greeted her. They called themselves the Covington Crocheters. As a Christmas gift for Mary Lou, the women had presented her an afghan with the group name intricately crocheted in it. 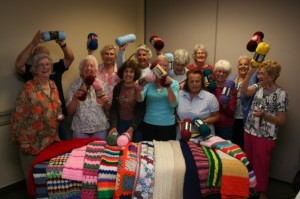 he group donated their time and talents to make baby blankets for the local hospital. For the past three years, each baby delivered at Covington Mercy Hospital was convivially wrapped in a blanket handmade by one of the town’s ladies for his or her first ride home. It was a great source of pride for the women to look upon the children of the town and know that each of them had been embraced in her creativity.

Mary Lou set the donuts on a waiting platter, next to the percolator on a table at the far end of the room. The women gathered round her, sipping from their Styrofoam cups of steaming decaf coffee. Before they sat down at the center table to begin their morning of crocheting, chatting and laughing, they cheerfully cut into, shared and enjoyed the donuts, smacking lips and dabbing away the powdered sugar at the corners of their mouths.

Mary Lou, as she always did on the first Saturday of each month, looked around and smiled contentedly at her group. Then she reached into the bag and took out the last remaining item – her chocolate covered Bavarian custard crème filled delicacy and enjoyed her morning coffee and donut with the Covington ladies.

Before Saturday, I’d never been to the Roller Derby. 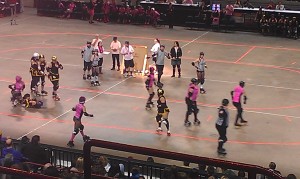 I remember watching bouts on TV during my childhood. Those were the days when there were only three major channels, PBS and a couple of UHF stations that showcased roller derby and wrestling in between John Wayne and Planet of the Apes movies. Recently there seems to be a renewed interest in a sport that’s been around since 1935. 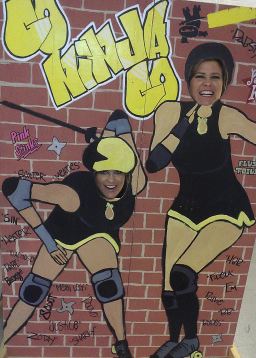 Me and my alter ego

So last weekend I attended my first Roller Derby event. Love, love, love was certainly in the air for the Brew City Bruisers Rollergirls. Energy crackled as the fans packed the stands for two bouts – first up was the Maiden Milwaukee versus the Crazy 8s, followed by an intermission of the junior rollergirls, and then the Shevil Knievels versus the Rushin’ Rollettes. It was a night filled with skaters, the jam, packs and penalties. None of it came across as fake or choreographed, and the falls looked like they really hurt. I ran into Bionica in the hallway after her Maiden Milwaukee bout and she was gracious enough to pose for a photograph. As tenacious and ferocious as she was on the rink, she was even nicer and outgoing in person. And I was surprised at how tiny she was – weren’t Rollergirls supposed to be big, hulking Broomhildas? One good hip-check and I could have felled her.

After watching the Drew Barrymore-directed movie Whip It, I was inspired to come up with my own roller derby name – the “Ann Ihilator”* I’m hoping to put it into action one day.

The alphabet exercise. Have you ever been tasked with something easier said than done and heartily groaned because you didn’t want to do it, but you dug in anyway only to find at the end that you really liked the challenge? Well, that’s what happened to me when this Alphabet Writing Exercise was given. In 15 minutes, I was to write a story where the first sentence started with the letter C and the next sentences would follow by letter (D, E, F and so on). I knew it wouldn’t be easy, but when the timer went off and pens went down, I was happy. It’s amazing what can happen when you just let go and let your creativity take over. Oh yeah, I only made it to T so that’s where the story ends . . . for now.
**********************

Could I learn to love him over time and forget he only had one eye? Didn’t he deserve happiness as much as everyone else did? Everyone else. Forget about the everyone else is what I needed to do and just follow my heart.

Gilbert was a good man, with a good job and lovable personality, but with only one eyeball in what was otherwise a perfectly fine head. He called on me often and when I said yes, he took me to dinner at the café down by the docks where they served bottles of Chianti at each red-checkered cloth covered table. Italian was his favorite food and sometimes while we talked, he called me his “Bella.” Just the thought of Gilbert makes me smile until I think of his one eye and then I cringe. Kept hidden behind a black patch with scars escaping up and down, Gilbert had yet to tell me the story of why his second eye socket wasn’t there. Long ago, maybe when he was a child, he learned to lie and say it was damaged in an accident whenever anyone built up enough courage to ask what happened.

Mother said I should learn to appreciate him as unique rather than deformed, and that everyone had defects, some more obvious than others. Nevertheless, the thought of looking into only one eye creeped me out and prevented me from opening myself up and loving him like he deserved to be loved.

On that Friday evening, he picked me up promptly at seven as the wind raged and the rain fell in torrential sheets. Pulling on my raincoat and my second-hand yellow Wellingtons, I thanked him for holding the large black umbrella as we made our way into the cab. Quietly, in the backseat, he reached out and brushed a raindrop from my cheek, and his touch was electrifying. Realizing I could no longer deny my strong feelings, I turned in my seat and without saying a word, for the first time lifted the patch.

Sitting rock still, Gilbert allowed me to examine him, his good eye closed to the sight. Tracing the soft pink area of flesh above his cheekbone with my fingers, I was no longer frightened by his appearance and lack of normality, and I gently replaced the patch.