No need to say it’s been a crazy year. Then this week started with a completely unnecessary gas buying panic here in North Carolina followed by the Governor’s mandate on Friday that we can all stop wearing masks if we’ve been vaccinated (except in certain locales). I’m thrilled about not having to wear masks in so many places but I do know people who are freaking the F out. I honestly hate wearing them, but I know they were necessary – at least for a while, while those with power scrambled to figure out exactly what we needed to do to combat this virus and they could never agree but always said the ‘science’ was leading them. What concerns me most at this point is that so many people incorrectly equate having the vaccine as ‘curing COVID-19.” Not the case at all, certainly with all the mutations and variants criss-crossing our globe.

For those of us not in the power, all we can do is ‘hope’ that those with the ultimate-decision power will do the right thing and not be swayed by politics, money or influence. But, in that, I don’t have much hope. After all, we’re in a world where the movie Forever Purge is being released and in the chaos and uncertainty that ran rampant for the past 14 months along with unchecked rioting, looting and murders during what were to be peaceful protests, these cruel plotlines don’t seem like science fiction anymore. In the meantime, I’m going to go hang out with my friends and get back to my life while I can.

So make a difference, think globally and act locally. Make everyday International Women’s Day. Do your bit to ensure that the future for girls is bright, equal, safe and rewarding.

While sitting in a line of congested traffic on the way into the office one morning, I observe the foot commuters in Uptown making their way from parking lots and bus stops to high rises and office buildings. This area is one of the nation’s largest urban regions, with more than six million people living within a 100-mile radius, so there’s ample people watching available while traffic inches forward.

One common denominator becomes obvious: a significant number of men use backpacks, while only a handful sport messenger or computer bags, and nearly no one carries a briefcase. For a week after, I keep a vigilant eye open during the morning and evening commutes, and what I see is that backpacks are not just a fad but a trend swing.

Briefcases are for self-important lawyers, not practical accountants. – Reddit user

When I started working in a variety of office environments about 25 years ago, backpacks were rarely or if ever used by anyone; briefcases or portfolio bags were all you saw. However, I did begin to notice a shift about 15 years ago when backpacks started popping up around the office (some the rollable kind with the retractable handle). Businesses embroidered them and companies gave them out to employees.

Sure, backpacks free up your hands, especially while travelling, but I’m still not convinced of their place in business. While I appreciate the comfort level and familiarity of it, the backpack conjures up a time long past: 18 years of schooling (along with the higher education years) stuffed full of wrinkled papers, dog-eared textbooks, broken pencils, unused protractors and smooshed brown bag lunches. 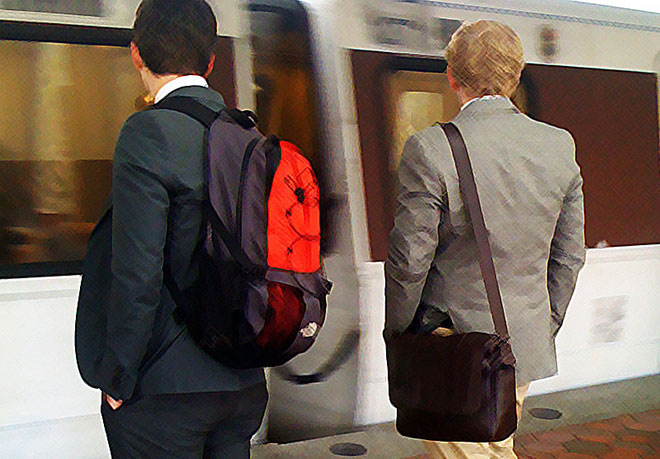 No one cares whether backpack vs briefcase until you make manager. Then other managers may make fun of you for wearing a backpack. That’s about it. But basically no one cares.

While more commuters in urban areas take mass transit, the backpack is seen as convenient, especially if the commute involves walking. It’s also a part of a business culture that is relaxing. No longer is formal business attire the dress-code standard and, in many places, casual Fridays have been extended throughout the entire workweek.

As our culture relaxes, the briefcase will always project a professional image but is no longer the bag du jour; it’s going the way of the three-piece suit and the monocle. Using a backpack seems to be the established trend, although it doesn’t mean you should look unprofessional or a snotty-nosed 12-year-old. Men’s Health offers style tips on which backpacks project professionalism: http://www.menshealth.com/style/backpack-at-the-office.

So which do you prefer – the briefcase or the backpack?

I came across this graphic and realized how accurate it is. A company needs all the components to manage change and see success. 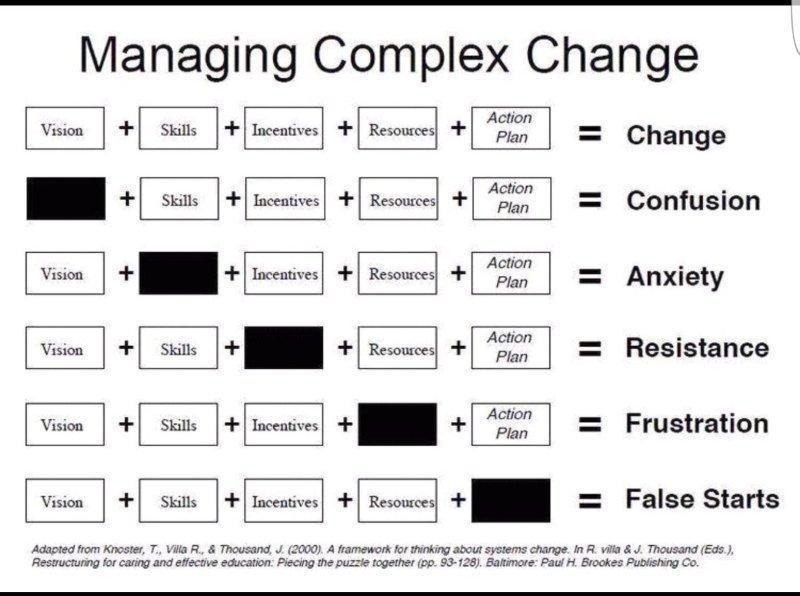 Do We Really Need An International Women’s Day?

On August 26, 1920, the Suffragettes in the United States, after a hard-fought series of votes in the U.S. Congress and in state legislatures, saw the Nineteenth Amendment became part of the U.S. Constitution. It was progress and change for the advancement of equal rights.

However, nearly 97 years later, the inequality of women continues to endure. Women make up half the workforce, yet earn only 80 cents on the dollar compared to male counterparts.

So YES we need an International Women’s Day. Take notice. Step up. Be Bold. Make a difference.

See this article from The Institute for Women’s Policy that outlines the pay equity and discrimination prevalent today.